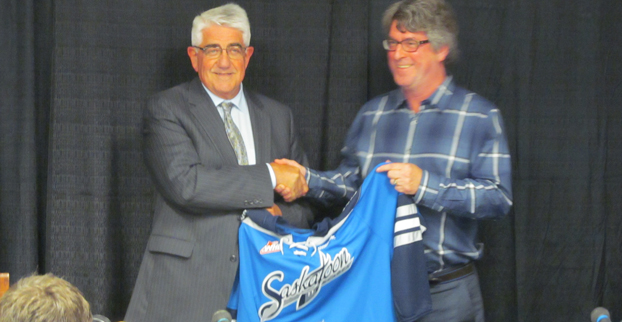 The Saskatoon Blades are very pleased to introduce their new ownership group and management staff this afternoon at the Credit Union Centre.

The team sale and transfer of ownership comes following a unanimous vote by the WHL’s Board Of Governors at a meeting on Wednesday afternoon in Calgary.

A former WHL goaltender, Mr. Priestner is the owner of Go Auto, an Edmonton based automotive company which owns over 30 dealerships in Western Canada.

“Given his highly successful career in the automotive industry, we are confident Mike Priestner is capable of meeting our expectations as the new owner of the Saskatoon Blades franchise,” commented WHL Commissioner Ron Robison.  “Mike is committed to doing whatever is necessary to maintain the storied tradition of the Blades in the Saskatoon community.”

New Saskatoon Blades staff members were also introduced by the team on Thursday.

Steve Hogle will take over the position of team president in Saskatoon.  He departs the Edmonton Oilers to join the Blades.  He took on a number of different roles with the NHL club.  He was serving the role of vice-president of hockey communications, where he oversaw TV, radio and the club’s website.  Along with that, his duties included game-day presentation, alumni relations and community events.

Colin Priestner will take over the role as managing partner of the Blades.  Priestner carries with him a great passion for business and for hockey and is making the move from Edmonton to Saskatoon to take on an everyday role with the club.  He previously served as the vice-president of Go Auto from 2006 until 2012.

The sale of the team ends a long era between the Brodsky family and the organization.  The Brodsky family have owned the Saskatoon Blades franchise since 1976, with Jack Brodsky serving as both team president and governor since 1992.

The Blades are the longest standing WHL club in the 48 year history of the League.