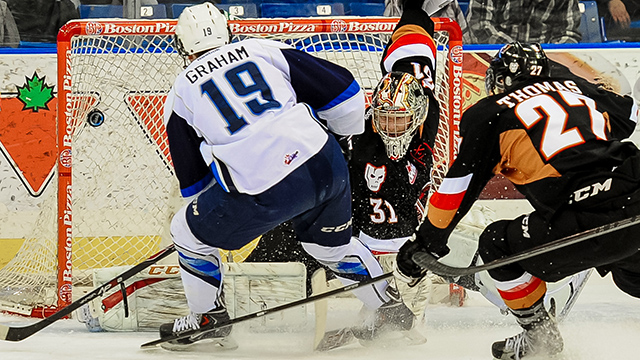 The Saskatoon Blades are ready to say goodbye to the cozy confines of the Sasktel Centre, as they embark on a three game Alberta road trip.

The Blades will head to Edmonton for a game with the defending Memorial Cup Champion Edmonton Oil Kings on Friday night. They’ll follow that up with a game in Red Deer on Saturday against the Rebels.

“Its a fun trip that we always look forward to” said forward Ryan Graham, who hails from Calgary. “When we get the chance to go home for a bit, play in front of family and friends, we’re fired up”.

The Blades final game before the Alberta trip was at home against Seattle on November 8th – a game the Blades won 4-2.

“Its nice to go on this trip on a winning note, get the confidence going. We played well, we skated smart against a bigger team. We’ll be ready for this road trip”.

The three game trip wraps up Sunday with an afternoon game in Calgary against the Hitmen.