Blades score early and often in win over Broncos 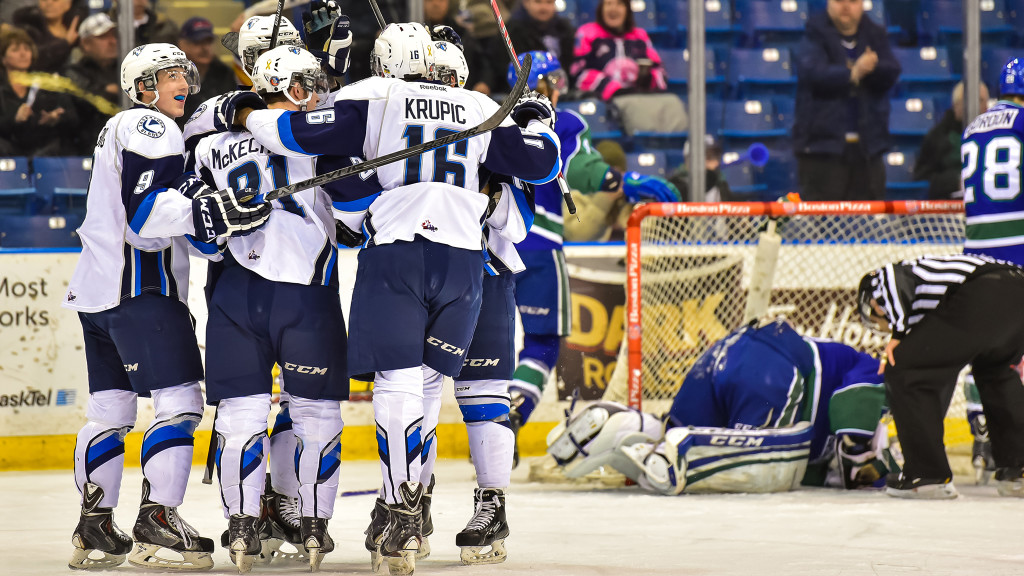 Before the Blades and Broncos would do battle, there were a little pre-game festivities to attend to. Curlers Stefanie Lawton and Sherri Singler, who recently represented Saskatchewan at the Scotties Tournament of Hearts in Moose Jaw, were on hand to drop the puck.

“It was so much fun,” said Lawton after the puck-drop. “It’s so nice to be out at a game, meet fans, and just have some fun after a good but stressful week.”

With the pre-game fun out of the way, the teams would get down to business. Perhaps the famous curlers being on hand would fire up the Blades – seven minutes in, Brett Stovin would score his 26th of the year to make it 1-0 for the Blades. Just ten seconds later, with the Blades on the powerplay, Sam McKechnie would knock another one in, and the Blades would have an early 2-0 lead.

The score would stay that way until the end of the frame. With three minutes left, Colby Cave would take a pass from Jake DeBrusk and beat Brock Hamm to make it 2-1.

The Blades wouldn’t be content with the one goal lead though – with just thirty seconds left in the period, Cameron Hebig would beat two Broncos in the corner, walk in front, and fire it home to make it 3-1 for the Bridge City Bunch, which is how the first period would end.

Early in the second, the Blades would build on the lead. Big blueliner Kolton Dixon would fire one from long distance, and it would find it’s way in, giving Dixon his first goal as a Blade, and giving Saskatoon a 4-1 lead.

“It felt great to get that first one,” said Dixon after the game. “Bob has been harping on me to shoot more, so I did, and it went in!”

The Blades would keep it coming. Late in the frame, Hebig would fire his second of the game past Landon Bow, and the lead would grow to 5-1. The boys would pad the lead even more in the period, with Stovin scoring HIS second of the game to make it 6-1 after 40 minutes.

“I got a little lucky tonight, but Ill take it,” said Hebig. The one I walked in, got a nice shot off, the other shot went off someones twig and in, but I’m not gonna say no, so it’s nice to get them.”

“I have to give credit to my D,” said the humble goaltender. “They were great in front, so a lot of the shots were coming from the outside.”

While the boys were happy with the 6-2 win, their Coach found a few areas for improvement.

“Ill never turn down a win, but I wasn’t really happy overall,” said Woods. “We had some bad habits. Turning the puck over, taking plays off, just being lazy. Thankfully, they weren’t able to get back into it, and Brock played great in net, but I don’t want us thinking that just because the score was lopsided, we had a great game. We need to play hard every game, if we want to compete every night with the top teams.”

The Blades will have Thursday off, before heading to Moose Jaw to take on the Warriors on Friday.