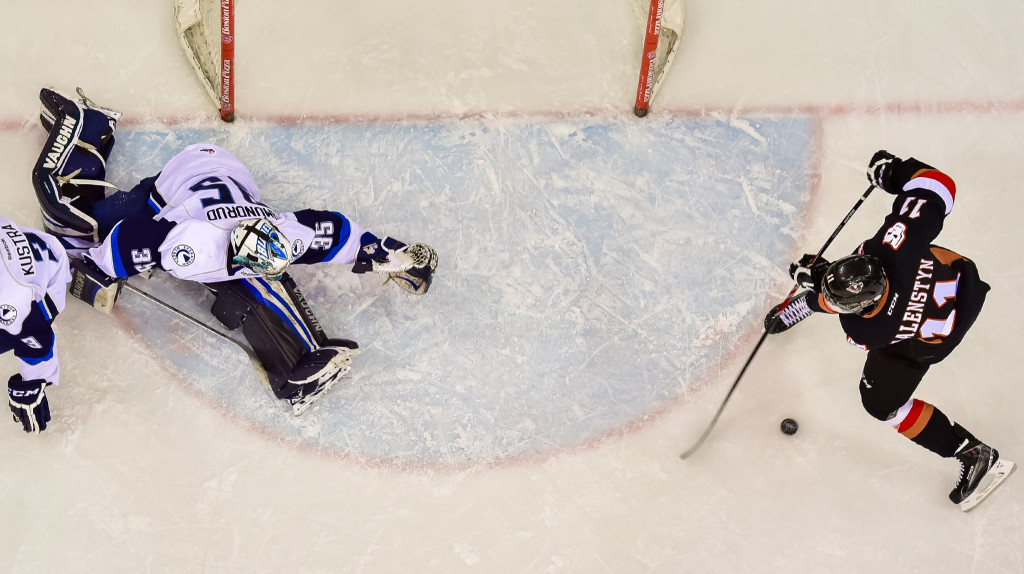 The Blades were looking to snap their two game skid and get back on the winning track, but they would face a tough challenge – the Calgary Hitmen, winners of seven straight games.

“They’re a very good team,” said Luke Gingras before the game. “Big, tough and quick. We need to play smart and physical if we want to hang with them.”

Things would start well for the boys in blue – with Calgary serving a penalty early in the first, Brett Stovin would fire one past Mack Shields. Almost 500 soccer players – on hand for Salute to Soccer – would go wild, and “Gooooooooallll” would rink out through the speakers to celebrate the Captains 22nd tally of the year.

The lead wouldn’t last long, as just minutes later, Kenton Helgesen would pick up a rebound and slip one past Nik Amundrud, tying it up, which is how it would stay through the first period.

Midway through the second, the Blades would slip up – despite being shorthanded, Calgary would send Adam Tambellini in all alone, and he would slide one past Amundrud to make it 2-1.

“They won the special teams battle tonight,” said Head Coach and GM Bob Woods. “We know we need to be better if we’re going to hang with tough teams.”

They would build on the lead – with two minutes left in the frame, Michael Zipp would find the back of the net, and the Hitmen would grab a 3-1 lead, which is how the period would end.

Two minutes into the third, the Blades would take advantage of Calgary’s penalties – Josh Uhrich would beat Shields, and the lead would be cut to 3-2.

Unfortunately, it wouldn’t last long – Terrell Draude would take a feed from Jake Bean and beat Amundrud, and the Hitmen would again grab a two goal lead. Keegan Kanzig would bury another one just minutes later, and it would be 5-2, which is how it would end.

“It took us too long to get going tonight,” said Stovin after the game. “We were flat for awhile, and they took advantage. We just weren’t good enough to get a win.”

“We’re dead tired,” added Uhrich. “It’s been three games in three nights, against three good teams. Obviously that’s no excuse, every team has their tough road trips, but it’s hard on a young team. We need to take positives from it, and get ready, because we have a tough schedule coming up.”

The Blades are in the midst of an incredible seven-games-in-ten-nights stretch.

“It’s very tough,” added Stovin. “We need to buckle down, get ready, because this is a hard, but important part of our schedule.”

The Blades are in action at home on Tuesday, when they host the Spokane Chiefs. It’s Rider Night – Anthony Allen and Paul Woldu from the Saskatchewan Roughriders will be on hand for photos and autographs.