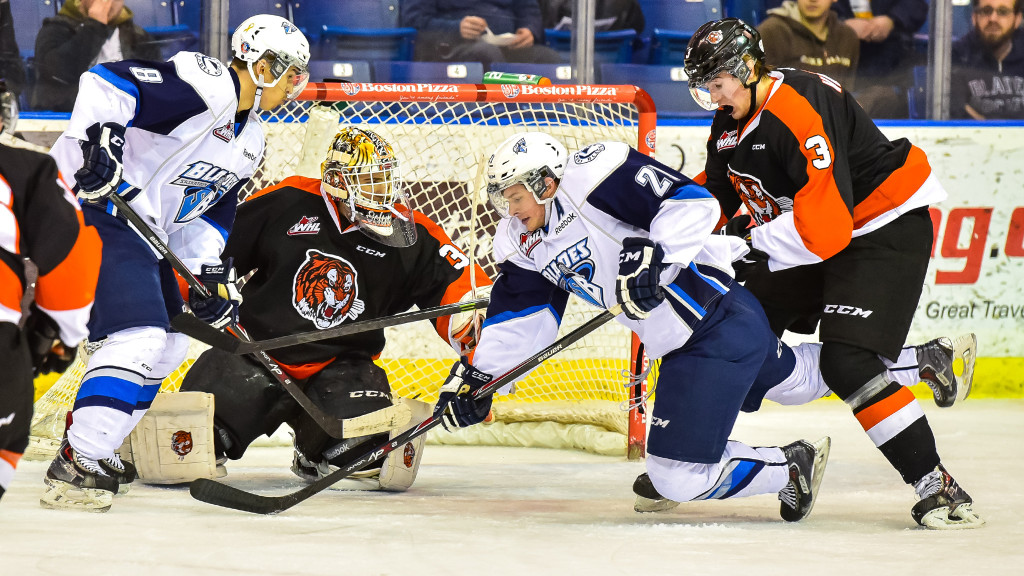 The Blades were looking to get lucky. Go all in. Whatever phrase you want to use, the team was hoping to win big when they hosted the Medicine Hat Tigers, on Vegas Night.

“They’re a great team, and we need a little bit of that lady luck,” said Head Coach and GM Bob Woods. “But we feel good, we’re ready, and we’re hoping to hit the jackpot on Vegas Night here, and it should be fun.”

Just two minutes in, Lady Luck would indeed shine brightly on the boys in blue – despite Wyatt Sloboshan sitting out for hooking, Brett Stovin would fire one past Nick Schneider, short-handed, to make it 1-0 Saskatoon.

Later in the frame, the Blades wouldn’t be so lucky. With Luke Gingras in the box, Nik Amundrud would do his best to keep the Blades lead intact, turning away countless shots, until Dryden Hunt would finally bury one to tie it up.

With less than a minute left in the first period, special teams would again play a big role – with the Tigers serving a penalty, Cameron Hebig would pick up a rebound and score his 11th of the year to restore the Blades lead and make it 2-1 heading into the second frame.

Midway through the frame, the penalties would continue to bite the Blades – just five seconds into a man-advantage, Matthew Bradley would beat Amundrud to tie it up a 2.

Just minutes later the Tigers would score to take the lead, again on the powerplay. This time it would be Tyler Lewington that would find the back of the net, and it would be 3-2 for Medicine Hat.

“Those penalties, as we’ve said a lot, are bad news”, said Brett Stovin. “We need to play smart, especially against the top teams.”

The Blades wouldn’t stay down for long though – Sam McKechnie would fire one past Schneider, and it would once again be tied up.

The cards wouldn’t fall the Blades way late in the frame – with two minutes left, Connor Cox would add to his league-leading points total, scoring just seconds after a Tiger powerplay ended, once again giving the Tigers the lead, this time 4-3.

“It was a wild one,” said Bob Woods after the game. “Back and forth, but we hung with them, and I’m proud of the boys.”

Three minutes into the third, with Medicine Hat serving a penalty, the Captain would once again tie it up – Stovin would bury a shot through traffic, his second of the game, and it would be 4-4.

“It feels great,” said Stovin after the game. “Just great effort from everyone, my linemates, we worked hard, didn’t give up when we got down.”

The Blades would look to take the lead in exciting fashion midway through the third – Nikita Soshnin would be awarded a penalty shot after being taken down! Unfortunately, the dynamic Russian forward would be stopped, and it would remain tied.

However, it wouldn’t stay that way for long. The Blades would take the lead after a goal from an unlikely source – 16 year old defenceman Nolan Reid would pot his first of the season, and the Blades would lead the mighty Tigers 5-4 with 10 minutes left in the game. Could the young Blades hit the jackpot on Vegas Night and hang on to defeat Medicine Hat? The answer, to quote the Macho Man Randy Savage – “Ohhhhhhhh Yeahhhhh!”

“It was a big one,” added Woods. “Vegas Night, we won big! I’m proud of the guys, knocking off a top team like that.”

The Blades are in action again on Saturday, when they host Kootenay.