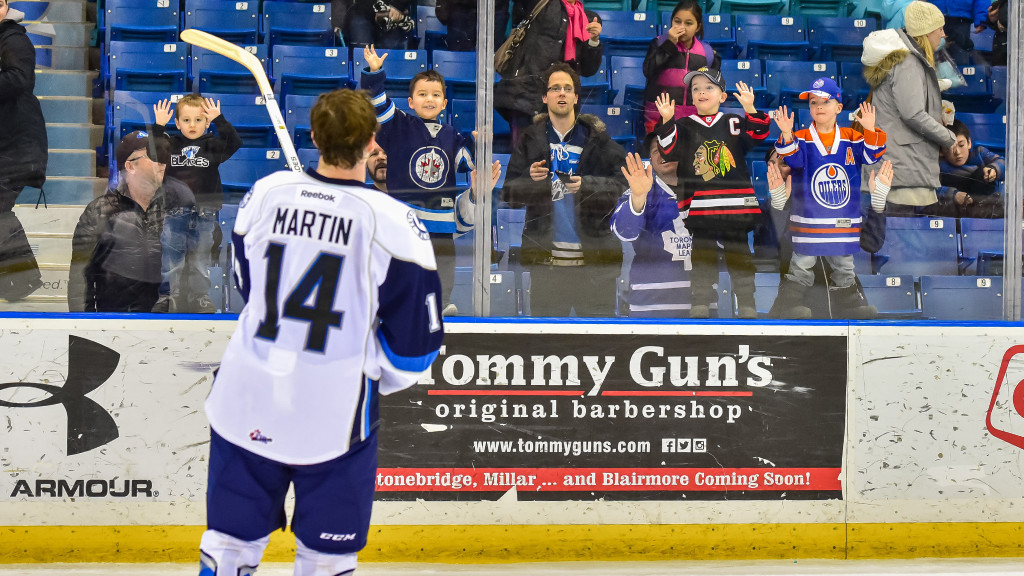 After dropping the first game of a home-and-home on Friday night in Swift Current, the Blades were looking for revenge on the Broncos.

“The good thing about back-to-back games is you can shake off a loss quickly,” said Assistant Coach Dean Brockman. “We weren’t ready to go last night, but we will be tonight, and hopefully we can get a win.”

Midway through the first, the Blades would get a little revenge – and it would be a former Bronco doing it. With the Broncos serving a penalty, Brycen Martin, who was acquired from Swift Current earlier this month, would bury his 5th of the year to give the Blades the lead.

“It felt great to get one against my old team,” said Martin. “I didn’t play well last night. Too much pressure on myself I guess. I played much better tonight.”

Early in the second frame, the Blades would once again capitalize on Broncos penalties – Nikita Soshnin would tip one in right in front of the crease, and the lead would grow to 2-0.

The Broncos would have several great chances in the frame, but Nik Amundrud would make several sprawling saves that would make Dominik Hasek proud, and it would stay 2-0 heading into the break.

“There’s a reason we call him Nicky Highlight!” said Bob Woods after the game. “Nik, he’s a great goalie, and when he turns in nights like this, it’s special. He had a few huge saves.”

“I like the nickname,” said a smiling Amundrud after the game. “It’s nice to know the boys believe in me, and it’s great when I can come through for them.”

Just eleven seconds into the third, the Blades would strengthen their lead – again on the power play. Brett Stovin would fire one past Landon Bow, and it would be 3-0 for Saskatoon. It was also the third point of the game for former Bronco Brycen Martin.

“I’m happy with the game I had. They were talking smack pretty good to me on the ice, but I tuned it out, just focused on the game. It’s good to get a big two points against a division rival.”

The Blades would stay hot – minutes later, Nick Zajac would hit Mason McCarty with a perfect pass in front of the net, and he would fire one past Bow, making it 4-0 for Saskatoon. That’s how it would end – a big win for the Blades, and a shutout for Amundrud – his third of the year.

“Nikky is playing hot right now,” said Woods. “A big game for him, and a big win for the boys.”