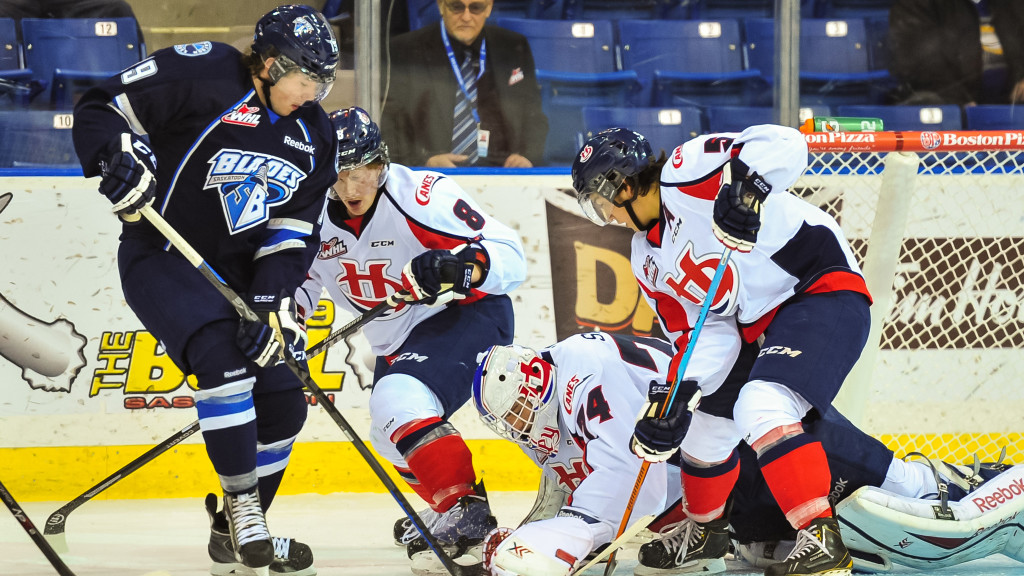 When the Saskatoon Blades hit the ice at the Enmax Centre in Lethbridge, they’ll do so looking a little differently. Gone are Alex Forsberg, Adam Henry, Trevor Martin and Jordan Thomson – in are Brock Hamm, Brycen Martin and Kolton Dixon.

“It’s certainly going to be a little different, as there’s a lot of new faces,” said Head Coach and GM Bob Woods at morning skate. “But we brought all of these guys in for a reason, and I’m excited to see them play.”

Woods has shaken up his team through a series of trades – Forsberg to Victoria, Henry to Portland, Thomson to Swift Current and Martin to Red Deer. In return he’s gotten younger, acquired a boatload of valuable draft picks, and brought up a top goaltending prospect in Hamm, who was called up from the Humboldt Broncos to replace Martin.

“He’s happy to be here and we’re happy to have him. Amundrud will start in Lethbridge, but Brock may get a look against Kootenay.”

The Blades also have another new player along for the road trip – although the last name may look familiar. The team has called up Brayden Uhrich, brother of Blades forward Josh.

“You would think one Uhrich is more than enough!” Woods said with a laugh. “But we were a little undermanned this weekend, and Josh brought his name up, so he’s with us for the weekend, a bit of a tryout for him.”

“I’m so excited to be here,” said the younger Uhrich brother. “I owe Josh for going to bat for me, and I’m really excited to get the chance to prove myself.”

The Uhrich’s are famously known for their gritty style of play, and had a noteworthy scrap in the pre-season – against each other.

“Now that we’re teaming up, no more of that!” said Brayden. “But we both play gritty games, and it’ll be fun to team up.”

While all the new names may be a bit of a change for fans – and the Blades players themselves – Woods says he’s excited about the new-look team, and expects big things.

“These are the guys I want here. Every guy is here to play his role and help this team. I’m excited, and so are they.”

After the Lethbridge game, the Blades will travel to Cranbrook to take on the Kootenay Ice.