Nogier To Have Season-Ending Surgery 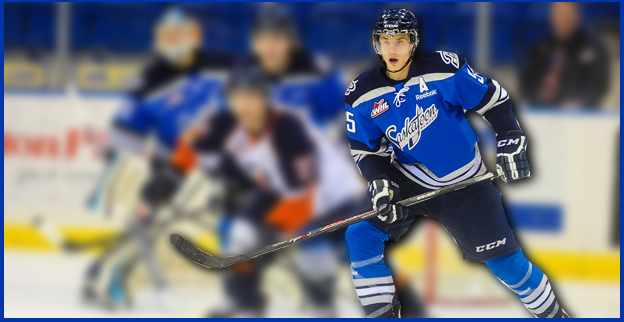 The Saskatoon Blades and general manager Lorne Molleken have announced that defenceman and alternate captain Nelson Nogier will undergo surgery to repair an injured shoulder.

“Nelson Nogier injured his shoulder during our game in Edmonton on December 15th,” announced Molleken.  “He’ll head in for surgery later this month to repair the labrum in his right shoulder and we fully expect it to be a season-ending injury.”

The procedure is expected to sideline the Saskatoon product anywhere from 3 to 4 months.

“Obviously it’s an unfortunate thing to happen,” said the Blades defenceman.  “But, injuries come with the game so I’m just going to have to deal with it and try and move on in my career.”

Nogier had appeared in 37 games this season prior to suffering the injury.  The 6’2, 193 pound blueliner had posted 6 points, 25 PIMs and a -2 rating while also scoring his first career WHL goal on October 9th against the Vancouver Giants.

The injury will also force the 71st overall selection in the 2011 WHL Bantam Draft to miss this year’s edition of the BMO CHL/NHL Top Prospects game on January 15th in Calgary.  Jacob Middleton of the Ottawa 67’s will replace Nogier on Team Cherry for the event.

The Saskatoon Blades next home game is actually a day game as they meet the Swift Current Broncos on January 1st!  The game goes at 2:00PM and is followed by a postgame skate with the Blades for the fans.  Bring your helmets and skates to the rink and go for a spin following the game!  You can get your tickets by clicking here.

The Blades also have Ukrainian Night approaching, with the 101st Grey Cup Champion Saskatchewan Roughriders also appearing at the game for autographs and a special ceremony. Read more about that big night and find ticket links by clicking on this story.