Silvertips win wild one over Blades on Ukrainian Night 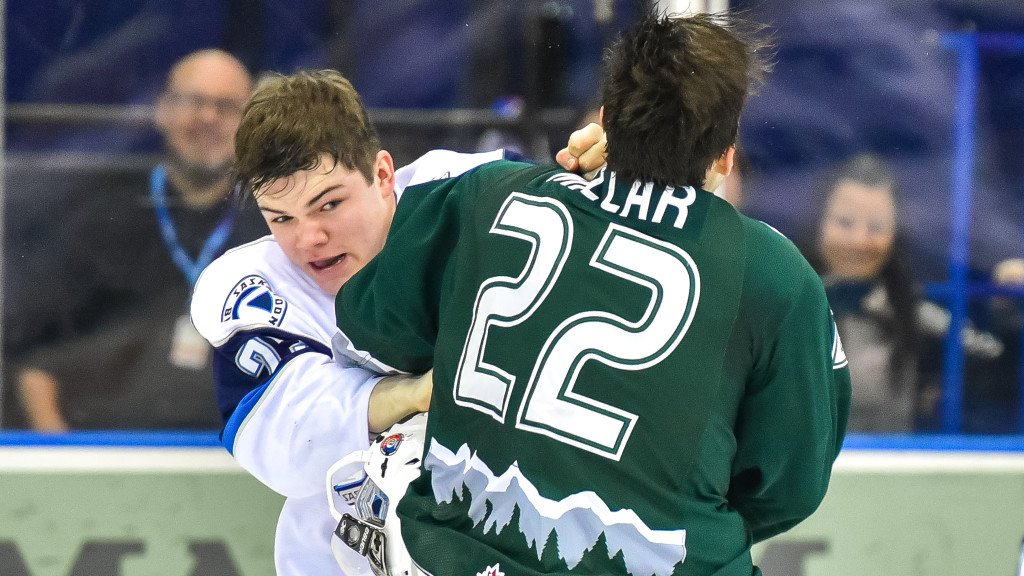 It was sure to be one of the most exciting games of the year for the Blades – Ukrainian food, music, dance, and some great hockey against the Everett Silvertips, as the Blades held their annual Ukrainian Game.

“It’s always a good time and we look forward to it,” said Brett Stovin before the game. “Big crowd, they’re loud, and it’s just a lot of fun.”

The Blades would start the game off the on the right foot, and it would be a familiar name hitting the board first – Sam McKechnie would beat Carter Hart on a power play, his 7th goal in the last five games, to make it 1-0 Saskatoon.

Everett wouldn’t stay down for long though – as Kohl Bauml would crash the net and knock one past Nik Amundrud to tie things up, which is how the first would end.

Unfortunately for the boys in blue, the second wouldn’t start as well as the first. Just seconds in, with Everett on a 5-3 power play, Bauml would score his second of the game to make it 2-1. Only a minute later, they would strike again with a Blade still in the penalty box, as Graham Millar would get a power play goal to give Everett a 3-1 lead.

Everett would keep the firepower coming – only three minutes after the previous goals, Dawson Leedahl would beat Nik Amundrud, and what was once a 1-0 Blades lead would now be a 4-1 deficit.

“I thought we had a great first period, but things got away in the second,” said Coach Bob Woods. “Too many penalties, too many mistakes, you can’t do that against a good team.”

Unfortunately for the Blades, it would continue – two minutes later, Dawson Leedahl would tip a shot in from former Blade Nikita Scherbak, and it would now be 5-1 for the Silvertips, leading a switch in net, as Trevor Martin would replace Amundrud.

“It felt great to be back in Saskatoon,” said Scherbak after the game. “The fans, they were great. It did feel a little weird to put on a different jersey here, to play against my friends I used to play with, but once the game started, I was ready to go, ready to win”.

Tempers would boil over at this point – Garrett Armour would earn a game misconduct after a questionable hit, and Schael Higson would get into a monster fight with Graham Millar, leaving the Silvertip a bloody mess. The penalty box would get cozy, seeing three Blades sitting shoulder-to-shoulder.

“My first fight, not just in the WHL, but ever,” said Higson. “I think I caught him off guard being a lefty. I felt a little bad that he got hurt [Millar ended up with a broken nose,] but the team needed a jump so I decided to get in there.”

Midway through the third period, the Blades would work to chip away at the lead. With Nikita Scherbak in the penalty box, Jordan Thomson would score on the powerplay to make it 5-2 for Everett.

Unfortunately, the penalties would continue to haunt the Blades. With Higson in the box with 5 minutes left in the game, Patrick Bajkov would beat Martin and the lead would stretch to 6-2, which is how it would finish.

“It was a tough one,” said Woods. “Too many mistakes, way too many penalties. Amundrud had a tough one against his former team. We just got outplayed.”

With the trade deadline coming up next week, Woods admits he may do a little shopping.

“In our situation, we have to listen to every call, look at every situation. We have some teams calling, a lot of team this time of year are looking for defencemen, veteran guys. So we’ll listen to everything, do what’s in the best interest of the team.”