As the 2019-20 Western Hockey League’s regular season approaches, two teams will be previewed each day leading up to the start of the regular season, Friday, Sept. 20. Team capsules are presented in order of 2018-19 finish within their own division. Today, we take a look at the East Division’s Saskatoon Blades.

Forwards: Last season, the Saskatoon Blades made big strides in the East Division, finishing second behind the 2019 Rogers WHL Champions, the Prince Albert Raiders and fourth overall in the league. Defenceman Dawson Davidson and forward Max Gerlach, both 1998-born forwards, played a major role in the offensive success of the team as their top two scorers. With Chicago Blackhawks prospect Kirby Dach trailing not far behind with 73 points (25G-48A), the Blades will have a lot of scoring power to make up for this year with Davidson and Gerlach graduating and the potential of Dach staying to play with the Blackhawks.

While it is a bit rare for freshly chosen NHL Draft prospects to jump to the ‘big leagues’ six months after the NHL Entry Draft, if anyone has a shot at it, it’s Dach. Although the Blades would be elated for Dach to make the jump, they are also hoping that he will return to Saskatoon to support their offensive drive. 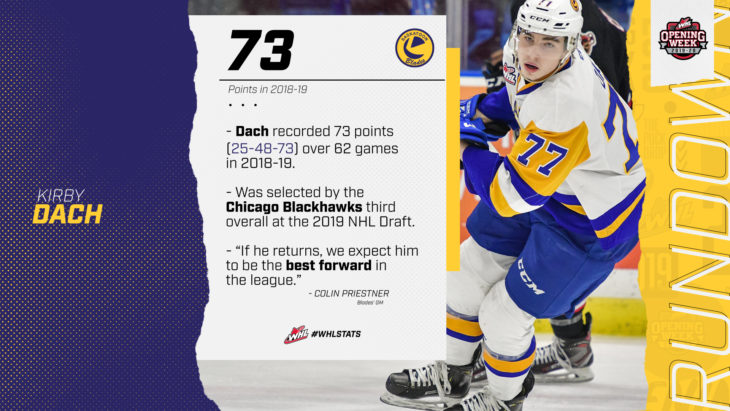 “Obviously Kirby would be a huge addition,” Priestner said. “We don’t know what the situation is going to be out there and we probably won’t know until the end of October kind of area, but if he returns, we expect him to be the best forward in the league and I think that’s a pretty big name to get back.”

Looking at the remaining forwards for the Blades’ roster, Eric Florchuk (21-29-50) and captain Chase Wouters (15-24-39) will be the go-to-guys Head Coach Mitch Love relies on up front this season. While they may not have been at the top of the list in terms of scoring last year, the Blades are expecting them to make a jump in their performance and become leaders offensively.

“Wouters and Florchuk we really like at centre and they’re going to be guys that we rely on,” Priestner said. “After that, it’s all guys that had up-and-down years in terms of production and we’re going to need to see who emerges from that group. Whether that’s through additions we’ve made to the group via trade or guys that are going to step up internally.” 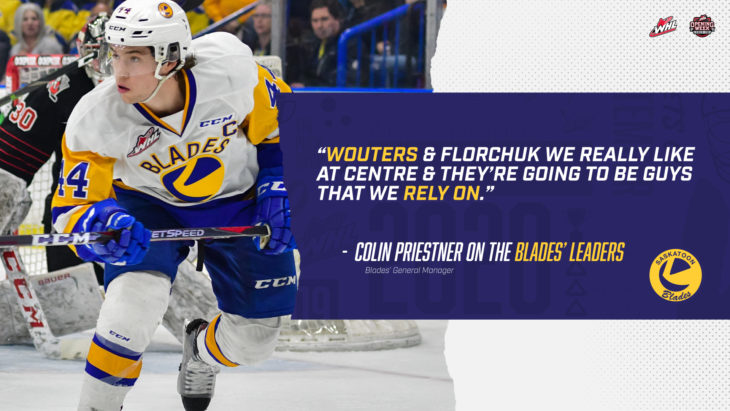 “We’re excited about Colton Dach,” Priestner said. “He’s had a very strong camp, he’s a very unique player and he’s going to be a 16-year-old so there’s not going to be a ton of expectation on him, but I think he’s a really capable player at 16.”

Defence: While the Blades may not be able to pinpoint their offensive power right away, their defence looks strong. After acquiring rearguard Scott Walford in exchange for forward Gary Haden from the Victoria Royals in the off-season, Saskatoon feels their depth on the bluelines will provide a solid foundation for the team.

“We’re going to have Nolan Kneen who’s a big-time point producer and big-time minute eater,” Priestner said. “He was our top minutes per game player last year and he had a 45-plus point season in 55 games, so he had a real great year and we expect him to be a top defenceman in the league, especially being a right-handed shot.

“Adding Scott Walford, we feel that’s a really good compliment there and we think they are capable of being the number one D-pairing in this league, especially with Walford. Those are going to be guys that really carry the load for us on the backend.”

While Nolan Kneen is known for being more of a traditional defenceman, Walford is known for his ability to generate goals with his playmaking ability. Combining both players together will be smart not only to help balance the two of their talents, but as Priestner said, they could be one of the strongest defensive pairings in the league.

The Blades are also expecting Aidan De La Gorgendiere to take the next step in his WHL defensive career as he becomes available for the 2020 NHL Draft.

“De La Gorgendiere is going to have a big season with his draft year coming up and have an enhanced role from what he did last year on a real deep defensive lineup,” Priestner said.

Goal: Nolan Maier will continue to be the star in net for the Blades after posting a 2.64 goals-against average, .910 save percentage, 36-10-6-0 record and four shutouts in 53 games last season. As a 2001-born netminder, Maier is still eligible for the 2020 NHL Draft and will strive to improve his stats and continue to support the Blades’ in a tough East Division.

Last season in backup, Dorrin Luding put up a 2.91 GAA, .909 SV%, 9-5-2-0 record and one shutout. In his last year of WHL eligibility, Luding will look to support Maier more evenly in net this season.

Player to watch: In his debut season, Kyle Crnkovic recorded 31 points (11G-20A) in 52 games. While he is on the smaller side of most 2020 NHL Draft prospects at 5-foot-7, 161-pounds, Crnkovic is a non-stop engine. His ability to generate offensively in both small areas and on the rush should show through well as a second-year player and it will be needed for the Blades to be successful. 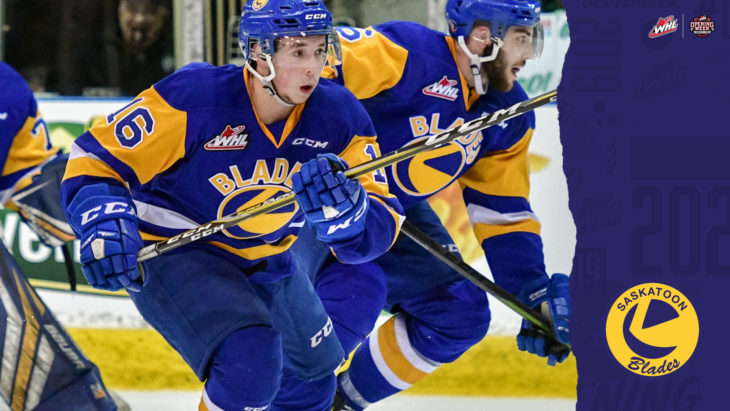 Prognosis: With Dach’s status still unknown until the end of October, the Blades will have to forge on with the group they’ve got and become independent of his contributions. While they may have taken a big step in the East Division and the league last year after making it to the second round of playoffs, Saskatoon will have to work even harder this year to achieve that status again. But as Priestner alludes to, there’s plenty of incentive for the Blades to go beyond their success from last season.

“I think we’re at a pretty good point in our evolution as a team,” Priestner said. “I think we had some re-building years, but every single year since I’ve been here, we’ve improved our winnings and point totals each year. 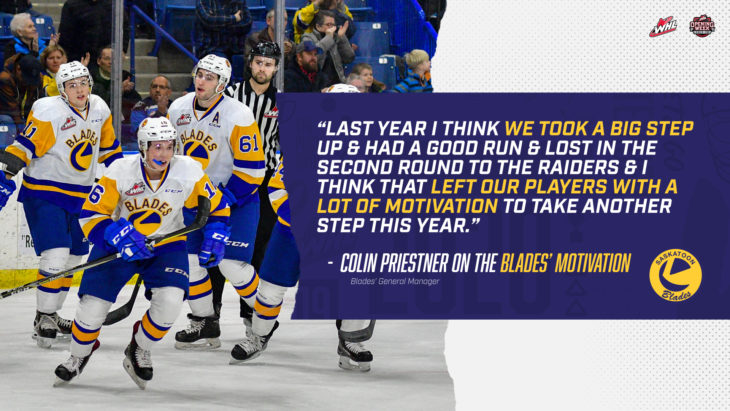