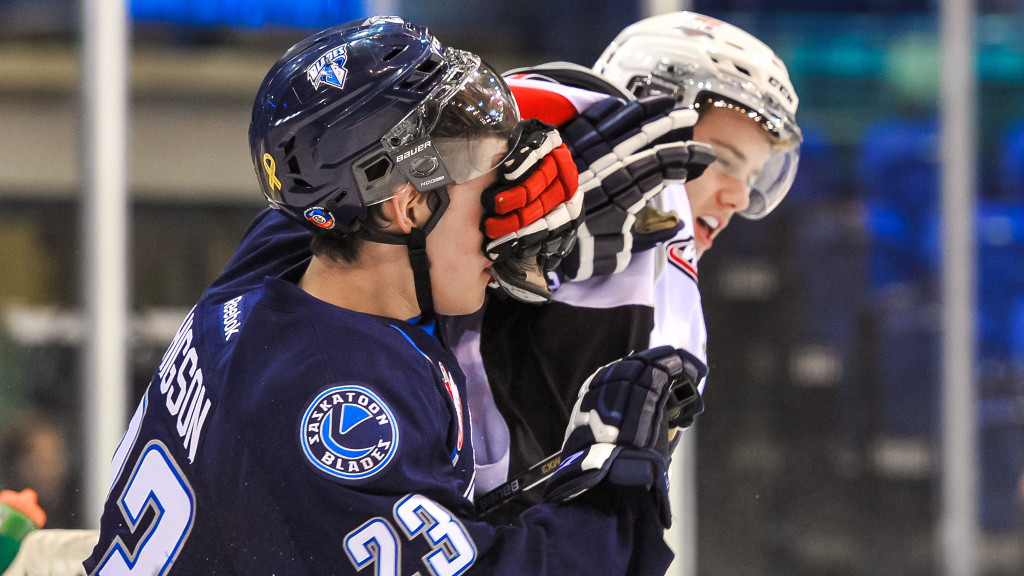 A bus ride home through the night from Brandon, followed by a home game is a tough task for any team, but the Blades were fired up for the Warriors. Winning a wild overtime game against the top team in the East will put a team in a good mood, says defenceman Ryan Coghlan.

“We’re confident and we’re ready. We came in today, had a good meeting, got a good sweat going on the bike, and got ready to get another win”.

The Blades would get the chance for their second win in a row, as they hosted a tough Warriors team.

Just a few minutes in, Coghlan would send a message that his team was indeed ready. The Blades blueliner would flatten Jesse Shynkaruk with an open ice hit, eliciting cheers from the crowd.

The game would stay scoreless until the end of the first, when Amil Krupic would be sent to the box for holding. Despite turning away several shots on the power play, Nik Amundrud would finally be beat by Brayden Point with only one second left in the first period.

Three minutes into the second frame, the Warriors would strike, again on the power play. With Nikita Soshnin off for hooking, Jack Rodewald would one-time a laser past Amundrud for his 13th of the year, giving Moose Jaw a 2-0 lead.

“We’ve been having problems with the penalties” said captain Brett Stovin. “Its tough when you’re always a man down. It seemed like we were a little weary, took a bit to get going, and we made a few mistakes that got us in trouble”.

That score would carry over into the third, until Moose Jaw would once again light the lamp. Amundrud would make a nice stop on Jiri Smejkal, but Tanner Jeanhot would be on the doorstep to bury the rebound for his first career WHL goal, putting the Warriors up by three.

The Blades would finally get things going midway through the third. Following the story of the game, it happened on the power play. With Moose Jaw serving a penalty, Stovin would snipe one top corner to beat Justin Paulic, cutting the lead to 3-1.

The special teams action would continue – with five minutes left in the third, and Moose Jaw serving a penalty, Ryan Graham would take a pass from Cameron Hebig and slip it past Paulic, making it a 3-2 game.

“We got some momentum going, and like the games against Brandon and Swift Current, we kept coming back” added Graham. “We have to keep working, be a team thats tough to play against”.

Unfortunately, the Blades wouldn’t be able to come all the way back. With the Saskatoon net empty, Jaimen Yakubowski would seal the deal, and Moose Jaw would take the win, 4-2.

“It was a tough one to lose for sure” said Graham. “We started slow, rallied back, but just ran out of gas at the end. Now we need to get ready for Friday when we play Brandon”.

“It’ll be a good game on Friday” added Stovin after the game. “We beat Brandon last time, we know they’ll be ready for the rematch, more focused”.

The game on Friday will feature a special treat for fans – its Nikita Scherbak Russian Nesting Doll Night. The first 2500 fans in attendance will receive a Nesting Doll of last years leading scorer for the Blades.