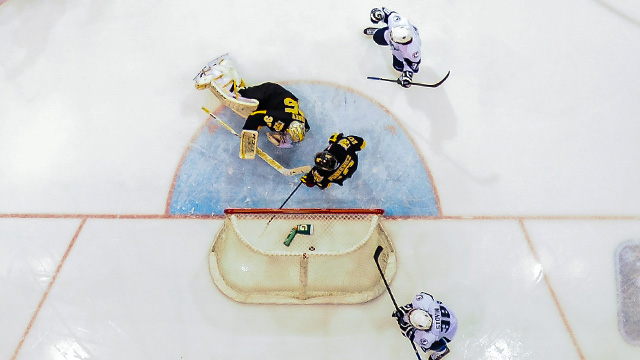 It was a classic David vs. Goliath battle – the Brandon Wheat Kings, who lead the Eastern Conference, taking on the young Saskatoon Blades, who came into the game sitting six points out of the eighth and final playoff spot in the East, and looking to snap a three game losing streak.

Unfortunately for the boys in blue, they didn’t have their slingshot to start the game. Brandon struck quickly – former Blade Tim McGauley sniped his ninth of the season past Alex Moodie just thirty five seconds into the game, putting the Blades in an early hole.

The Wheaties would keep it coming, as seven minutes in, John Quenneville took advantage of a screened Moodie, sniping his 6th goal of the year, giving Brandon a quick two goal lead.

“It wasn’t a good first period at all” said Blades Captain Brett Stovin. “We came out flat and got in a quick hole and we were trying to come from behind all night”.

Midway through the first frame, they would add to their lead, as captain Peter Quennville, after being stopped once, would bury his own rebound, making it 3-0 Brandon.

Things would get even worse for the Blades, as just one minute later, Wheat Kings star Jayce Hawryluk would score his 12th of the year. Coach Bob Woods had seen enough, pulling Moodie, and replacing him with Trevor Martin.

“It just wasn’t his night” said the bench boss. “I just thought we had to make a change, when you get down quick against a great team like that”.

It was a tough day all around for the Blades, as many players missed the game due to injury. Top forward Ryan Graham was out, as were several defensemen – forcing the team to move Captain Brett Stovin, a winger by trade, to the blue line. Stovin gave it his all, but it wasn’t enough to stop the vaunted Wheat Kings offence.

After a scoreless second, the Blades finally hit the scoresheet in the third period. Stovin got his first of the year, after ripping a snapshot past Papirny to cut the lead to 4-1.

“Man to get that monkey off the back, it felt good” said Stovin after the game. “The boys congratulated me in the room, but I couldn’t celebrate it on the ice, we were down quite a bit, and coming back was the important thing”.

Unfortunately, the Wheat Kings saw to it that there would be no come back. Jesse Gabrielle and Braylon Schmyr would both beat Martin in the third, building the lead to 6-1. Amil Krupic would add a late goal for the Blades, but it wasn’t near enough, as Brandon would take a commanding 6-2 win.

The Blades face a quick turnaround now, as they host Seattle on Saturday night – meaning a long bus ride through the night.

“You gotta try get some sleep. hopefully don’t get bus-legs” added Nick Zajac. “You can’t use it as an excuse. We’ll bus back, maybe have a meeting tomorrow, and be ready for Seattle”.

Blades fans should get their jeans and cowboy boots ready, as the game against the Seattle Thunderbirds is Cowboy Night! Tickets are still available at ticketmaster.ca, or by calling the Sasktel Centre Box Office at 306-938-7800.

It was a milestone night for Blades forward Nick Zajac, who notched his 200th career WHL game. Zajac, who hails from Manitoba, had dozens of family and friends in the crowd to watch.